Your weight can have a significant impact on lymphedema.  In order to be most effective in controlling or even preventing lymphedema, managing your weight with healthy lifestyle choices can be the most important thing you do.  Currently, over 69% of Americans are overweight or obese, so weight loss for lymphedema management is important for most everyone. Center for Disease Control Weight Stats

Commonly, swelling can be caused merely by excess weight or obesity, termed obesity-induced lymphedema. The mechanism can be overt, such as in the case of a large abdominal pannus where tissue can hang down from the waist and rest against the inguinal lymph nodes at the groin, creating a mechanical blockage. Also, when other common conditions such as venous hypertension, chronic venous insufficiency, and distended varicose veins are present, the challenge of removing fluid from the lower legs is compounded.

It is not uncommon for a person with excess weight to suffer from shortness of breath, even with mild exertion such as getting dressed, walking up a short flight of stairs, or standing in a shower and bathing.  Shortness of breath will then cause fatigue and lead to decreased activity. This, in turn, means the calf muscle pump is less effective for venous and lymphatic return from the lower legs. Losing even a small amount of weight commonly results in much better mobility, restoring oxygen to the tissues, and rejuvenating the muscle pump.

People with obesity are particularly vulnerable to being caught up in the cycle of adipose expansion and lymphedema, especially those with abdominal obesity. The abdomen has the greatest concentration of lymph nodes in the body and, as elsewhere in the body, the abdominal lymphatics are surrounded by a certain amount of healthy subcutaneous fat. When abdominal fat becomes excessive, though, pro-inflammatory agents such as C-reactive protein are not removed, and thus contribute to further inflammation. As weight increases, the cycle of obesity and lymphedema becomes even more difficult to escape. 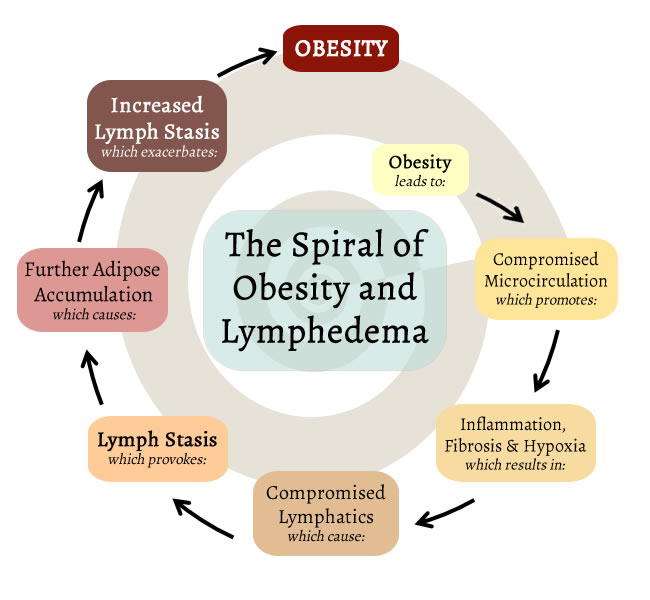 Regrettably, unless the cause of increased fluid load placed on a limb by obesity-induced lymphedema is addressed, a never ending battle will commence. It is no surprise that people with obesity have the least success in long-term management of their lymphedema. Obesity has a host of related conditions, such as cardiovascular disease, hypertension, reflux, sleep apnea, diabetes, arthritis, and some types of cancer. As with obesity and lymphedema, several of these additional disorders can also interact with lymphedema to exacerbate the overall unfavorable health of the client, and make achieving an optimal treatment outcome all the more challenging.

Fortunately, addressing obesity with an effective weight management program might not only eliminate the risk of developing lymphedema, but may also facilitate its treatment when lymphedema does occur from other causes (such as due to cancer treatment). A significant correlation between weight loss and reduction in volume in the lymphedematous limb was established in a study by Shaw, Mortimer, and Judd (2007). Because a reduction in volume of both arms occurred with weight loss in this study, albeit a greater reduction in the affected limb, the researchers believed that fluid as well as fat reduction occurred. This study also established that a relatively small amount of weight loss (as little as seven pounds) had significant impact on arm volume. Their findings suggest that a weight reduction plan needs to be part of the treatment for lymphedema.