When you read or hear that someone ate fat and something happened, such as in published research, be aware that there are many different types of fats.  Each of those fats are metabolized differently and have varying effects in the body. A discussion of fat can become quite complicated. Here’s a (very simplified) overview to help you understand different types of fat and the implications for lymphatic health.

Classes of Fat:  Saturated and Unsaturated

Fatty acids can be long chain, short chain or medium chain, and then, even-chained or odd-chained, with quite an astounding number of combined variations.  You can see that there are potentially thousands of combinations. Each combination acts differently in the body. Fats can be consumed directly or they can be made in the body by the liver, out of carbohydrates.

Fat Transport in the Body

When three of these fatty acids attach to a glycerol molecule they form a triglyceride. Fat does not dissolve in blood, so for fat to be transported to where it is needed, most triglycerides are bundled by the liver into lipoproteins which can travel freely in blood. They travel through the bloodstream until they reach cells where the fatty acids are absorbed and used.  There are many different types of lipoproteins particles, dependent upon their function and makeup. You have probably heard of HDL (High Density Lipoprotein) and LDL (Low Density Lipoprotein), but there are many more lipoprotein variants including IDL (Intermediate Density Lipoprotein) and chylomicrons.  Most of these particles contain cholesterol, a type of lipid, so all the particles have come to be known as cholesterol by the medical community.  That is not a very enlightening or useful term. When you get a “cholesterol panel” through your doctor’s office, you would be better off getting what is called a “lipid panel” which gives a breakdown of the types of particles you have.  You can ask for an “NMR (Nuclear Magnetic Resonance) Lipoprofile Test” which will give you much more detailed and useful information. 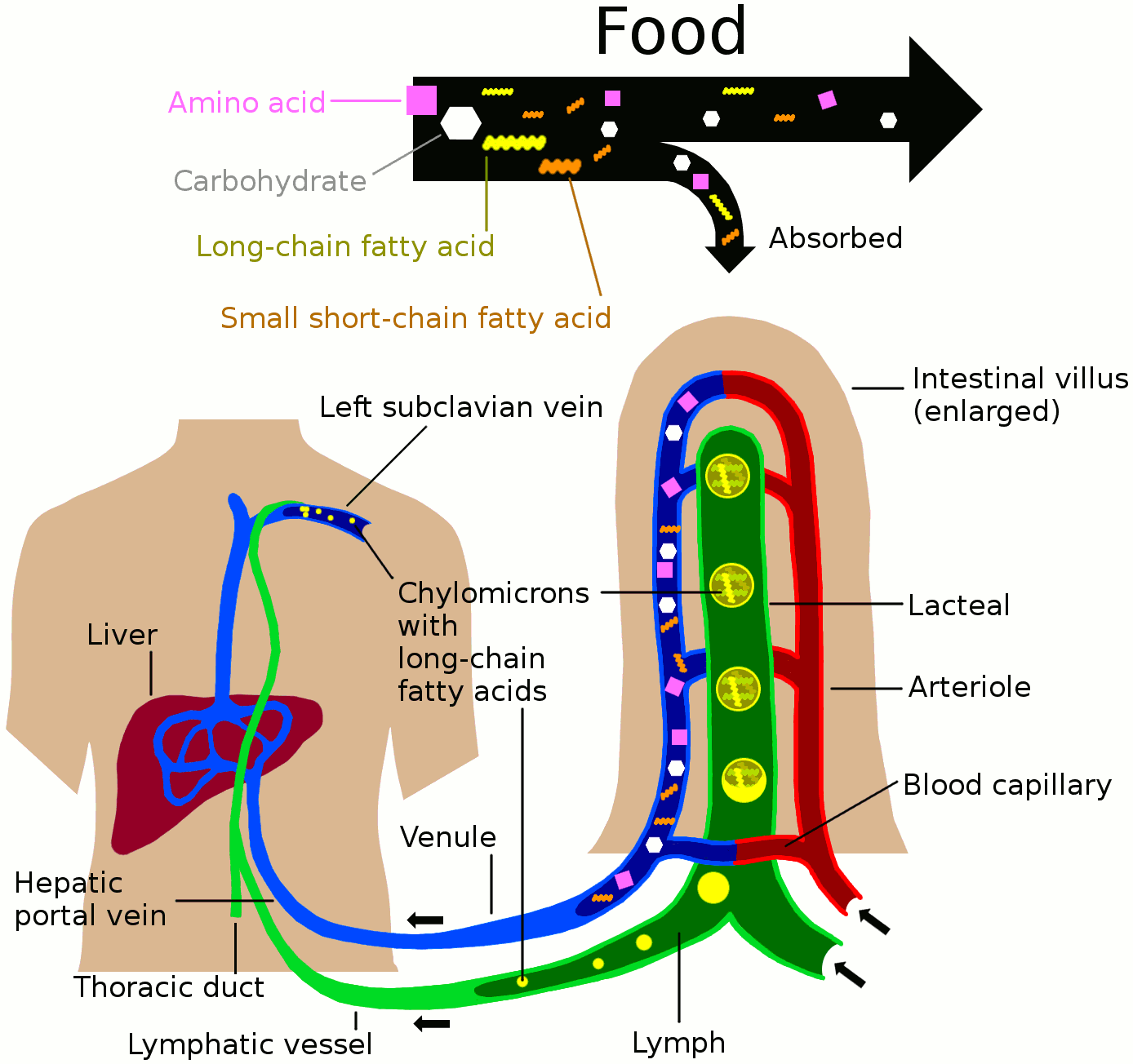 Of particular importance to the lymphatic system is the chylomicron.  When dietary fat is consumed, it is packed into chylomicrons which are large lipoproteins.  Chylomicrons are picked up by the intestinal lymphatics, or lacteals, and enter the bloodstream directly, via the thoracic duct, which is a very large lymphatic vessel that empties into a major blood vessel just below the collar bone. This is how much of our dietary energy gets into our energy storage system.  When chylomicrons encounter adipocytes, or fat cells, triglycerides are removed from the chylomicrons, and the chylomicrons shrink down to virtually nothing.

Chylomicrons, however, do not convert to LDL and have nothing whatsoever to do with heart disease.  Interestingly, this is agreed upon even by those who think saturated fat in the diet is deadly.

LDL, though, has been associated with cardiovascular disease.  The only way to have high LDL is to start with VLDL (Very Low Density Lipoprotein) which is made by the liver when eating carbohydrates.  Yet, despite this knowledge we are continually told, in all seriousness, that eating saturated fat raises our LDL levels and causes us to die prematurely of heart disease.  That hypothesis does not, and cannot make any sense from a biological or physiological perspective. Once the liver and muscles are full of sugar (stored as glycogen) the body can do absolutely nothing else with it, but turn it into fat.  According to Dr. Malcolm Kendrick,  https://drmalcolmkendrick.org/ this is basic, incontrovertible science. When you understand the science, you find yourself looking at the so-called diet/heart hypothesis, which says that fat in the diet raises LDL levels, leading to heart disease, and you understand that this does not make any sense at all.  Yet, eating carbs is supposed to be healthy, and eating saturated fat is supposedly unhealthy.

(A note:  Saturated fat is not trans fat.  Trans fats are on the way to being banned in all developed countries, so it is not of concern in this discussion.)

Fat and the Lymphatic System

Here are some excerpts from my book, The Ketogenic Solution for Lymphatic Disorders, discussing how your lymphatic system requires healthy fat to function properly:

The success of a ketogenic diet for managing lymphedema may be attributed to the fact that fat is integral to the health of the lymphatic system.  One study showed a correlation between dietary fat ingestion and increased movement of lymphocytes by the lymphatic system.(1)  The authors suggest that increased movement of lymphocytes in response to dietary fat metabolism may be a mechanism for keeping the immune system healthy and in a state of readiness.  This is one of many reasons why a diet high in healthy dietary fat is advantageous.

Chakraborty, et al. (2) demonstrated in their research that dietary lipid intake resulted in increased lymph flow, whereas ingestion of a high fructose diet resulted in decreased frequency of lymph contraction along with lower vessel tone.  Wong and colleagues (3) propose that dietary fat is essential to the functioning of the lymphatic system and may prove to be useful in the management of lymphedema. “Our study shows that the usage of fat by lymphatics is programmed in their development, and required for their growth and function.  We have demonstrated by enhancing or preventing the usage of fat (or fat byproducts), we can control the growth of lymphatics,” comments Dr. Brian Wong.

In one study to determine how best to treat chyle leaks (leakage of the milky white fat-rich lymph, or chyle, from the intestinal lymphatics into the abdominal cavity), the researchers suggest that by using a diet that restricts short and long chain fatty acids, the burden on impaired intestinal lymphatics will be reduced.(4)  A diet high in medium chain triglycerides (MCTs), they surmise, would supply essential fatty acids without contributing to chyle leaks because MCTs bypass the intestinal lymphatics and are transported directly to the liver via the portal vein. Unfortunately, most likely due to the requirement of fat for healthy functioning of the lymphatics, if other fats are in short supply, it seems that the lymphatic system will simply co-opt MCTs.  Jensen and colleagues (5) found an increased concentration of MCTs in the thoracic duct (a major lymphatic vessel in the trunk) when intake of short and long chain dietary fat was restricted.

Understand that eating fat leads to a healthy life and you have another reason to enjoy your ketogenic lifestyle!