A condition that is very common with US adults, and consequently with many people who have a lymphatic disorder, is gallstones.  This condition has become so common in the last 20 years that surgery to remove someone’s gallbladder is one of the 10 surgeries most often performed in the US.  The amazing thing is that gallstones may be managed, or possibly even prevented altogether, by a ketogenic lifestyle.

According to Johns Hopkins, in the United States, an estimated 10 to 15 percent of adults have gallbladder disease.  It is a common comorbidity with both lymphedema and lipedema as these conditions can all be exacerbated by a high carbohydrate diet.  Gallstones is the most common gastrointestinal disorder requiring hospitalization, contributing to the $5 billion annual medical cost of gallstones in the United States. 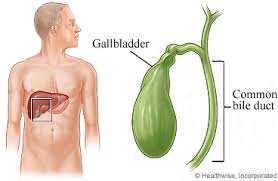 Your gallbladder is located just under your liver on the right side of your abdomen.  Its whole purpose is to help you digest dietary fat. Your gallbladder stores bile which is then secreted into your small intestine when fat is present.  It is a system that works very well. So why do so many people get gallstones and then get their gallbladder removed?

When a low amount of fat is consumed for a long period of time, bile in the gallbladder can stagnate and become supersaturated with cholesterol which then hardens into stones.  Problems may start after eating some fat when the gallbladder contracts in response in order to secrete some bile. A stone can get caught in the bile duct (a small tube that connects the gallbladder to the small intestine) and then it creates a blockage.  Regularly consuming fat, on the other hand, will allow the gallbladder to consistently empty, thus preventing stagnation, supersaturation and stone formation. Unfortunately, the low fat diet we have been told to eat for the last 40 years is contributing to the formation of gallstones for many people.

Some Risk Factors for Developing Gallstones

Obesity, especially abdominal obesity, leads to increased levels of cholesterol in the bile. At higher concentrations, cholesterol will be more prone to precipitate out into gallstones.

Weight loss, especially rapid weight loss with a lack of fat intake (often associated with typical dieting and/or weight loss surgery), allows bile a chance to stagnate in the gallbladder and form stones.

Hormone replacement therapy and estrogen-rich birth control pills tend to increase the amount of cholesterol in the bile and reduce the contractile movement of the gallbladder.

Being female/pregnant.  During their reproductive years, women produce plenty of estrogen, again, reducing the activity of the gallbladder.  Women suffer gallbladder disease at more than three times the rate of men. As many as 20 percent of women have gallstones by the time they are 60 years old.

Some cholesterol lowering drugs, but not all, can have a negative effect on gallbladder function.

Dr. Eades did a randomized clinical trial with patients to test a weight loss medication.  There were two groups: those receiving the medication and those who got a placebo. Only those who were gallstone-free were accepted into the study.  They were all, then, put on a low calorie, low fat diet. An astounding 15% of participants formed gallstones during the study!

Medications - there are medications that may gradually dissolve gallstones.  But, because the majority of Americans will go right back on a low fat diet after a gallbladder attack, medications are usually not recommended.

Dietary changes - Anyone suffering a painful gallbladder attack may want to limit their fat intake at least temporarily to mitigate the pain.  Unfortunately, the current medical wisdom is to cut out fat from your diet altogether. We know this will only cause the formation of more stones in the long run.

The first response by the medical establishment is often surgery - The thinking is that you can’t form any more stones if you don’t have a gallbladder.  Unfortunately, 40% of people who have their gallbladder removed continue to have the same symptoms!  Also, the quickly made choice to excise the gallbladder may be completely mistaken as symptoms may not have been emanating from the gallbladder at all.

Can You Enjoy a Ketogenic Lifestyle
Without a Gallbladder?

Yes!  Because this is such a common surgery, especially for women, there are many keto forums, such as Lipedema and Keto Facebook group, where people are posting about using this way of eating successfully without a gallbladder.  Stories abound regarding symptoms of nausea, diarrhea and cramping resolving after going keto.

You may have to make some adjustments like gradually increasing your intake of fat.  At first, you may not have enough bile to meet your needs when eating a lot of fat. Ask your medical provider about bile supplements or digestive enzymes, such as Ox Bile, to help with fat digestion.

The most important principle to remember regarding a ketogenic lifestyle is to keep your carb intake low.  Don’t worry how much fat you are eating. Eat fat to satiety, or to your tolerance, and your body will respond accordingly.   So, here’s another way that a ketogenic lifestyle can keep you healthy!